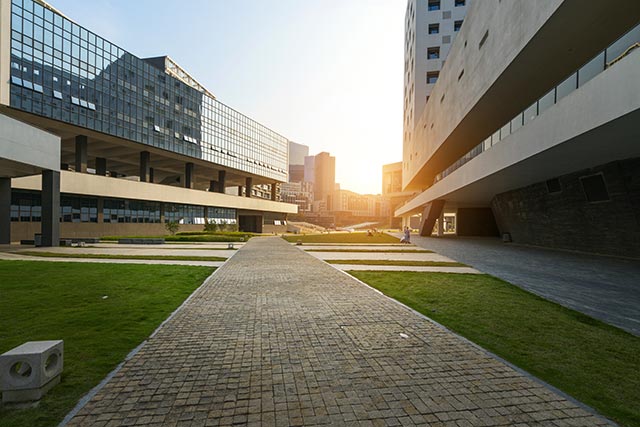 Karishma Shah Page is a partner with the K&L Gates law firm. Based in Washington DC, Karishma has spent her career advocating on behalf of a wide range of clients in front of Congress and numerous federal agencies. She convenes the Coalition for Energy Efficient Jobs & Investment, a diverse group of stakeholders organized around defending and strengthening the Section 179D deduction.

In an interview with NACUBO’s policy and advocacy manager, Neil Gavigan, Karishma and Kyle shared their experiences related to Section 179D. The conversation covers tactical approaches to implementing Section 179D on campus and insights from Washington about how advocacy around the deduction has changed and what the future may hold.

Kyle, as you know, securing a Section 179D deduction for an organization like the University of Texas at Austin requires serious collaboration between many internal and external actors. Can you tell us a bit about how you have explained the value of the deduction to internal stakeholders? What makes the extra effort worthwhile?

Kyle: About eight years ago, when I was filling the role of Tax Counsel for the University of Texas System, I got wind of the Section 179D deduction. I began having discussions about it in the context of the University of Texas System’s multi-billion-dollar annual budget for capital improvement projects. We were spending a tremendous amount of money on construction in the state of Texas because we had 14 institutions that were part of the budget. I wrote a short proposal on Section 179D and put it in front of some colleagues in the finance department. Based on the savings the deduction created for our projects, they saw that it had meaningful and immediate value.

It sounds like your colleagues in finance were quick to see the benefit in this. I am also curious, did you engage with anybody on the sustainability or construction side? Were there conversations having to do strictly with the energy savings aspect of Section 179D?

Kyle: No, I did not have to get in front of the folks managing construction. Due to the logistics of the office and how we were set up at the time, it was more of a financial issue than anything. We were already using LEED certified practices in our projects, and we just needed to capture that work so that we could potentially see some economic return for the system.

As far as working with external folks, we put a provision in our RFPs that required that designers come to the table and the Section 179D calculation and allocation in good faith. While we did not specify that we would be entitled to “x” dollars, we talked about the monetization of the benefit and how that would impact the designer as well as the System and then we would negotiate an effective resolution to assigning the credit.

The Section 179D deduction allows public entities to benefit by allocating the deduction to the person primarily responsible for the project’s design. How much of a challenge is the process of recouping the savings generated by the deduction? Who do you collaborate with to make sure things go as planned?

Kyle: The process we employed—to document the deduction and make it part of the agreement—made the process of allocating the deduction and recouping the savings a contractual matter, and that made the process quite easy. We put a provision in our RFPs that required that any designers come to the table and negotiate in good faith. We did not set that we would be entitled to “x” dollars, but we talked about the monetization of the benefit and how that would impact the designer and also us and then we would negotiate an effective resolution to assigning the credit.

We have long standing relationships with designers who have done a tremendous amount of work with us over many years, and I think it is in everyone’s best interest to negotiate in good faith—and that is required in the agreement.

Following years of uncertainty around Section 179D due to the need for annual extensions, the provision was made permanent as part of the Consolidated Appropriations Act of 2021. How does the deduction’s permanent status change the way that your institution utilizes it and how you plan for the future?

Kyle: Since we had already decided to try to avail ourselves of the deduction, it reminded me of back when Section 127 tax-free education benefits for employees would periodically expire. Every year we would try to see if it got retroactively reinstated. The permanency undoubtedly provides a sense of availability. I do not think it changes what we do, but it will make the process much easier. In the past, if it was not extended early in the year then we would have to guess and try to forecast outcomes. Permanence of the deduction makes the overall planning cycle smoother and easier.

Karishma, as a key advocate for the Section 179D deduction here in Washington, you were on the front lines of the push to make the deduction permanent. After years of fighting for temporary extensions, how did it feel to see a permanent deduction signed into law?

Karishma: It was a tremendous accomplishment for the Section 179D stakeholder community, and truly a team effort. The Coalition for Energy Efficient Jobs & Investment includes numerous Section 179D stakeholders, all of whom played a critical role in advocating for the permanent extension. I have had the privilege of working on Section 179D for over a decade, and have witnessed firsthand the perseverance and dedication of this community as we have worked through numerous short-term extensions over the years. To know that those who utilize Section 179D now have the certainty to plan for using Section 179D in the long-term to implement many more energy-efficiency projects, driving job, economic, and energy efficiency growth across the nation, is very gratifying.

How does permanence change the way that you advocate around Section 179D?

Karishma: Prior to achieving permanence, we were able to advocate for reforms to strengthen Section 179D, but that often took a backseat to focusing on short-term extensions. Having achieved permanence, it has really enabled us to focus more on how to strengthen Section 179D to ensure that it can have the biggest impact possible on improving energy efficiency, maximizing the tax policy’s impact as a climate tool. Although the legislation that made Section 179D permanent also included other reforms the stakeholder community has long advocated for, including indexing the deduction amount per square foot to inflation, it also included an update to the American Society of Heating, Refrigerating, and Air Conditioning Engineers and the Illuminating Engineering Society of North America (“ASHRAE”) standard used for projects from Reference Standard 90.1-2007 to “the most recent Standard 90.1.” This has raised questions amongst stakeholders regarding how to implement and interpret the update. As a result, much of last year was spent working with congressional offices to better understand the update and work to increase the amount of the deduction per square foot to be more reflective of the increased costs of Section 179D projects under the ASHRAE update, as well as working on other reforms. We anticipate that work will continue this year.

Recent drafts of the Build Back Better Act include significant changes to Section 179D. Among them, the legislation proposes to extend the deduction to nonprofit organizations and increase the maximum value of the deduction to $5.00 per square foot, provided that certain labor requirements are met. While the BBB appears to have stalled, it is still possible that some of its provisions may advance as separate legislation. Do you have a sense for how Section 179D legislation might fare separate from BBB?

Karishma: The Section 179D reforms included in the Build Back Better Act drafts are a part of a larger section of the bill focused on clean energy. There may be bipartisan interest in moving these provisions as a separate package. There may also be other opportunities to move the Section 179D reforms, such as a potential government funding package this winter or again later in the year. Section 179D is unlikely to move as standalone legislation, as tax policy legislation on one issue rarely advances in recent years unless it is included as part of a larger legislative package.

Are there any other potential legislative changes, whether included in BBB or not, that our readers might want to keep in mind as they consider undertaking a Section 179D project?

Karishma: The Build Back Better Act’s Section 179D proposals have the potential to significantly amplify the impact of the tax policy on climate change. Reforms being contemplated include decreasing the percent increase in energy efficiency over the most recent ASHRAE Standard 90.1 that projects must meet from 50% to 25%; potential changes to the cadence of the ASHRAE Standard used for this process; potentially increasing the amount of the deduction (it is important to note that, in the current Build Back Better Act drafts, this is contingent upon meeting certain labor requirements, including prevailing wage and apprenticeship requirements); allowing certain tax-exempt entities, including private nonprofit colleges and universities, to utilize Section 179D; allowing the maximum Section 179D incentive to be applied to a building once every three years; and, creating an alternative process for evaluating retrofit properties, among others. The Coalition for Energy Efficient Jobs & Investment continues to advocate on these reforms, either as part of the Build Back Better Act, or as noted earlier, as part of a separate legislative vehicle.

Additionally, we anticipate that the Department of the Treasury and Internal Revenue Service will likely issue a rulemaking in the coming months implementing the updates made to Section 179D in the Consolidated Appropriations Act, 2021. Stakeholders have urged them to clarify which ASHRAE Standard 90.1 is currently in place and the cadence of the Treasury affirmation process moving forward.

Kyle, do you have any advice for campus decisionmakers who might be considering utilizing Section 179D for the first time?

Kyle: This is a cause worth championing. I think it is likely that we are all involved in building projects that are going to be compliant and qualify for this, and it can help generate significant economic savings for our universities. It is well worth the effort to pursue.

Do not be afraid to be proactive and bring it up more than once with your colleagues. When I originally floated the idea of pursuing Section 179D, I got a kind of luke-warm response, and I had to reiterate that this could really be worth pursuing. I brought it up again and everybody came around. Next thing you know, it was built into all of our RFP templates, and we were rolling. It kind of took off on its own. It is a tax provision, but the actual work is not so much tax—the finance people owned the process for us.

The Department of Veterans Affairs announces a go-live date for its new enrollment certification system, Treasury Secretary Yellen urges congressional action as the debt limit is reached, and more.