Last year, the 2019 NACUBO-TIAA Study of Endowments® (NTSE) gathered data from 774 U.S. colleges, universities, and affiliated foundations to study FY19 (July 1, 2018 – June 30, 2019). In light of the COVID-19 pandemic and the uncertainty that the crisis is bringing to college campuses across the country, NACUBO and TIAA issued a survey to the study participants on April 27, 2020, to learn more about the impact on endowment values and investment and spending strategies. By May 5, 333 institutions responded, representing a 43 percent response rate.

The NTSE, a joint partnership between NACUBO and TIAA, is the largest annual study of college and university endowments in North America. 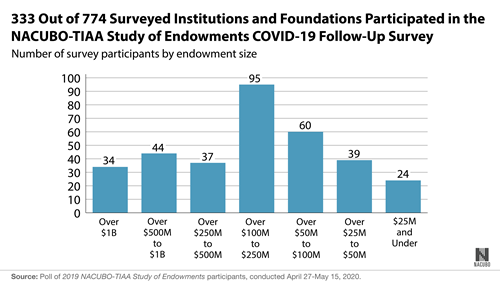 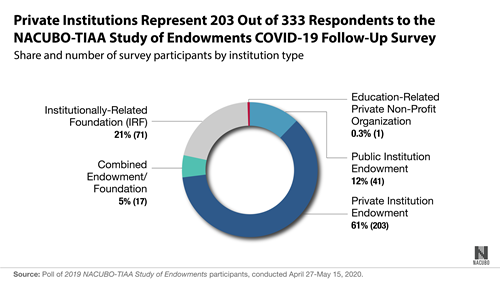 The average endowment size among the 333 schools that participated in the COVID-19 follow-up survey was $547.4 million, compared to $630.5 million, on average, among all 2019 NTSE participants and $240.2 million, on average, for the 2,677 institutions included in the Department of Education’s Integrated Postsecondary Data System. 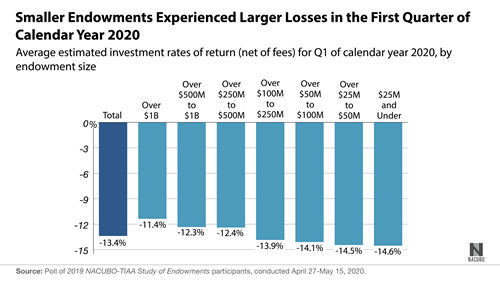 During the Great Recession of 2008-09, the last time stock markets had a deep decline, a special follow-up survey to the 2008 NACUBO-Commonfund Endowment Study reported that the average endowment saw a -22.5 percent return.

Institutions that participated in the 2019 NTSE had reported an average effective spending rate of 4.5 percent—which resulted in colleges and universities collectively spending about $22 billion from their endowments on student financial aid and other campus operations in FY19.

The 2020 NTSE has not yet been completed so we do not know the average effective spending rate for FY20.

However, with FY20 spending decisions made (but not yet reported to NACUBO), this new survey asked if institutions are planning any spending policy rate changes for FY21 (for most schools, this represents July 1, 2020–June 30, 2021). In total, 72 percent of institutions responded that they expect to maintain their current policy spending rate. 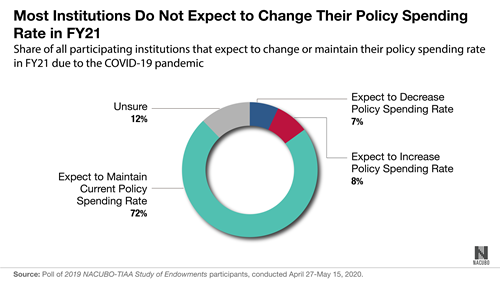 Only 8 percent of institutions reported plans to increase their spending rate, while 7 percent plan to decrease it.
In the past, some institutions have increased their endowment spending amid significant financial challenges. For example, in FY09, about half the colleges and universities in that year’s endowment study reported increasing spending from their endowments to support their campus operations.
It is likely that some institutions do not want to spend from these long-term funds because it could weaken their financial position in the future. In other words, a one-time payout may address immediate needs, but it might shortchange the availability of fund flows for the foreseeable future.
Further, endowments are mostly comprised of funds from donors who require that their gifts last in perpetuity and that the fund flows are used for specific purposes. These restrictions, as well as state laws, often prohibit funds from being used for annual operating expenses; they legally only can be withdrawn for donor-designated functions. 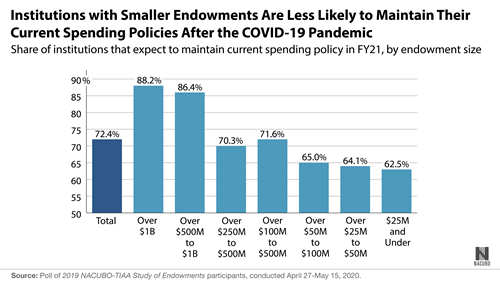 Many donors expect their contribution to serve its intended purpose in perpetuity, putting colleges in a position of ensuring the right balance of endowment spending while preserving the corpus. Such effective stewardship of donor funds must balance donor wishes against enough spending to meet the academic, research, and service missions of the institution.

If a fund falls below the original gift amount, it is considered underwater and could put its ability to be a sustainable, ongoing revenue stream at risk.

On average, this survey found that 20 percent of endowment funds were underwater at the end of the first quarter of 2020.

Some institutions consider it prudent to spend from an endowment that is underwater, as long as there is reasonable confidence the endowment will at least return to its threshold value at the end of an appropriate time horizon; they maintain a long-term outlook regardless of current market conditions. Other institutions will increase spending from older funds with healthy appreciation margins as a way of fulfilling their spending policy rate while allowing time for underwater funds to recover value.

Some of the respondents commented on underwater endowments in the open-ended responses, saying:

“We have a mechanism that reduce[s] spending automatically for underwater endowments.”

“We will revisit [the] spending rule distribution in fall 2020 related to potentially underwater endowments.”

“Underwater endowments will receive reduced payouts in accordance with our investment policy.”

“We will continue with 4 percent spend in FY21 but won’t spend those that are underwater unless the funds recover by June 30.” 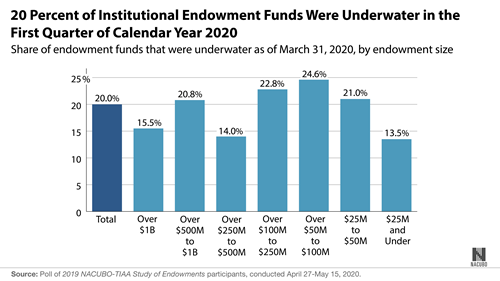 In March and April of 2009, following the Great Recession, the Association of Governing Boards of Universities and Colleges (AGB), in partnership with NACUBO and the Commonfund Institute, conducted a survey of colleges, universities, and affiliated foundations in states in which the Uniform Prudent Management of Institutional Funds Act (UPMIFA) had been enacted, in order to learn how institutions were managing endowment spending under UPMIFA and to inform decision-making by boards, finance officers, and endowment managers. On average, 38 percent of the dollar value of survey participants' total endowment pool was underwater as of December 31, 2008.

One key takeaway from the 2009 study was that UPMIFA had significantly enhanced the ability of colleges, universities, and other charities to provide sustained funding for endowed purposes during that financial crisis and encouraged boards to strengthen their processes for determining prudent endowment spending. Institutions and foundations had clearly taken advantage of the flexibility afforded by UPMIFA to increase funding available for student and faculty support and other endowed purposes.

While COVID-19 has created crisis-level economic conditions, the past decade has given college, university, and foundation boards the opportunity to adapt to the standards of UPMIFA and prepare for decision-making when faced again with underwater endowment spending.

While most institutions do not plan to borrow from their own endowments, 7 percent of private institutions reported that they will. One school reported, “We only anticipate borrowing from [the] endowment if we cannot open residence halls in [the] fall or see a significant enrollment decline for fall.” 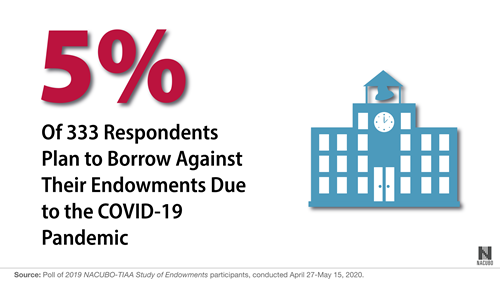 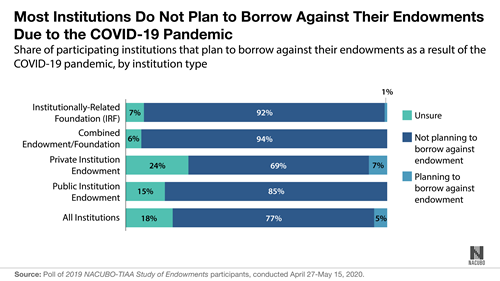 NACUBO’s survey also asked respondents what actions their institution has taken to reduce expenses related to the endowment or foundation. Common answers included:

• Intensified review of management fees
• Reevaluation of spending policies
• Rebalancing the portfolio and reconsidering asset allocations
• Contacting donors to supplement spending with additional gifts or modifying current restrictions
• Frequent investment committee and management meetings
For additional information on the impact of the pandemic on college and university endowments, please visit this FAQ. To speak with a NACUBO spokesperson about the findings, please contact Katy McCreary.

For NACUBO Members Only 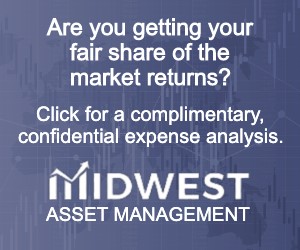 In episode 32 of the NACUBO in Brief podcast, NACUBO’s Liz Clark speaks with Juan about findings from the Knight Foundation's research on women and minority-owned management firms. 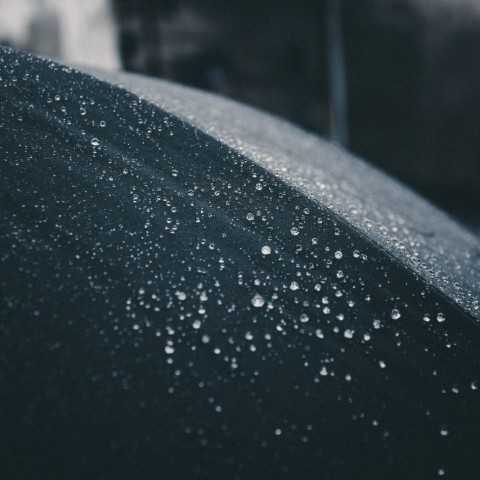 Endowments: How are Colleges Responding to Current Needs Without Shortchanging the Future?

In episode 53 of the NACUBO in Brief podcast, NACUBO’s Liz Clark speaks with Maeesha Merchant of California Institute of the Arts and Tom Heck of Ball State University about the role college endowments play in addressing this unprecedented crisis.