(Washington, DC) – Private, nonprofit colleges and universities sharply discounted tuition and fees for most students this year, according to data reported to the National Association of College and University Business Officers (NACUBO) before the coronavirus pandemic hit.

In the 2019 NACUBO Tuition Discounting Study, 366 private, nonprofit colleges and universities reported an estimated 52.6 percent average institutional tuition discount rate for first-time, full-time, first-year students in 2019-20 and 47.6 percent for all undergraduates – both record highs. By providing grants, fellowships, and scholarships, these institutions forgo about half the revenue they otherwise would collect if they charged all students the tuition and fee sticker price. 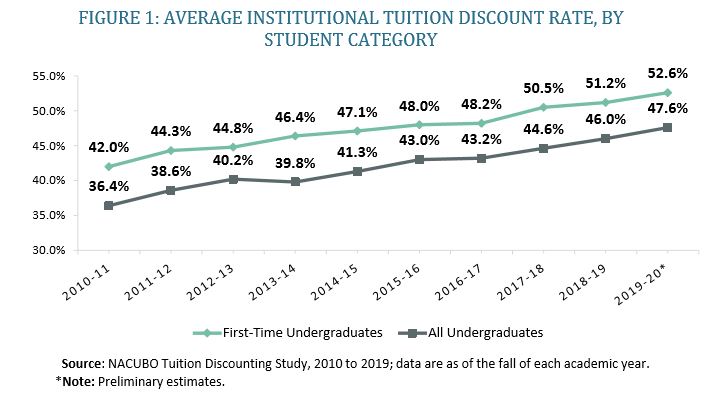 As the 2019 NACUBO Tuition Discounting Study shows, the vast majority of students do not pay the sticker price. Nearly 89 percent of all first-year undergraduates received institutional grant aid, which covered, on average, almost 60 percent of the published tuition and fees. Among all undergraduates, nearly 82 percent received institutional grant aid, which covered about 55 percent of the tuition and fee sticker price on average. Nearly 80 percent of the grant aid brought down the cost of college for students with demonstrated financial need.

In addition to expanding access, tuition discounting is one strategy institutions employ to attract and enroll students, but survey findings indicate that it’s not a fail-safe solution. Over the past four years, first-year undergraduate enrollment has increased at about 46 percent of the institutions that participate in the study and decreased at about 47 percent. After adjusting for inflation, net revenue from tuition and fees across institutions in the study fell by about 1.3 percent.

“Even before the COVID-19 crisis, private colleges and universities were significantly discounting tuition and fees, and some institutions were struggling with enrollment and net revenue,” said Ken Redd, senior director of research and policy analysis at NACUBO. “The study provides an important historic benchmark to consider as we head into an unprecedented era in higher education finance.”

For the first time in the history of the study, NACUBO examined data on tuition discounting, revenue, and enrollment by Carnegie Classification to meaningfully compare trends within peer groups. Journalists: For a copy of the full report or to talk with a NACUBO spokesperson about the findings, please contact Katy McCreary. The 2019 NACUBO Tuition Discounting Study is supported by EAB.