(Washington, DC) – Private colleges and universities are providing record tuition discounts to the majority of their students – underscoring the importance of considering net prices when evaluating institutions.

In the 2018 NACUBO Tuition Discounting Study, 405 private, nonprofit colleges and universities reported an estimated 52.2 percent institutional tuition discount rate for first-time, full-time students in 2018-19 and 46.3 percent for all undergraduates – both record highs. This means that for every dollar in gross tuition and fee revenue collected from all students, institutions used nearly half for financial aid, including grants, scholarships, and fellowships. 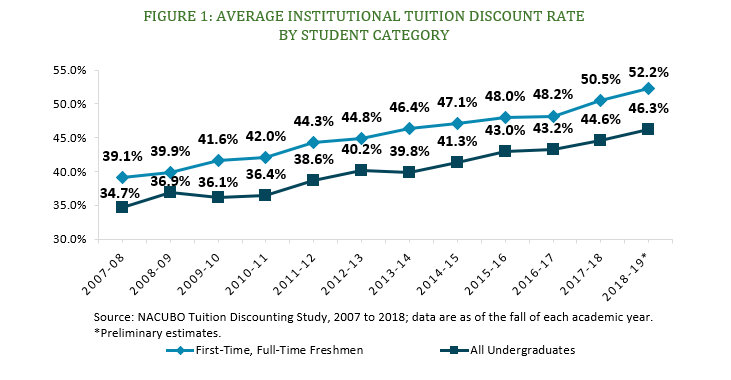 Over the past decade, these private colleges and universities have increased their average institutional grant for first-time freshmen by 91 percent, from $10,586 in 2008-09 to $20,255 in 2018-19. This year, an estimated 89.8 percent of freshmen received financial aid from their private colleges and universities, which covered nearly 60 percent of the listed tuition and fees. More than three-quarters was awarded as need-based aid or was merit-based aid that helped meet demonstrated financial need.

“Understanding the concept of ‘net price’ is more important now than ever,” said Ken Redd, NACUBO’s senior director of research and policy analysis. “Recent polls show that many Americans consider higher education unaffordable, but the private institutions that participate in our survey are providing substantial financial aid to most of their students, year after year, which significantly reduces the actual price students and their families have to pay and may put a college education in reach.”

Tuition discounting strategies have impacted net tuition revenue growth, which hasn’t kept pace with inflation for the past six years. For 2017-18, participating colleges reported a 0.8 percent drop in net tuition revenue from first-time freshmen, which equates to a 3.6 percent decline after adjusting for inflation, as measured by the Commonfund Higher Education Price Index®. 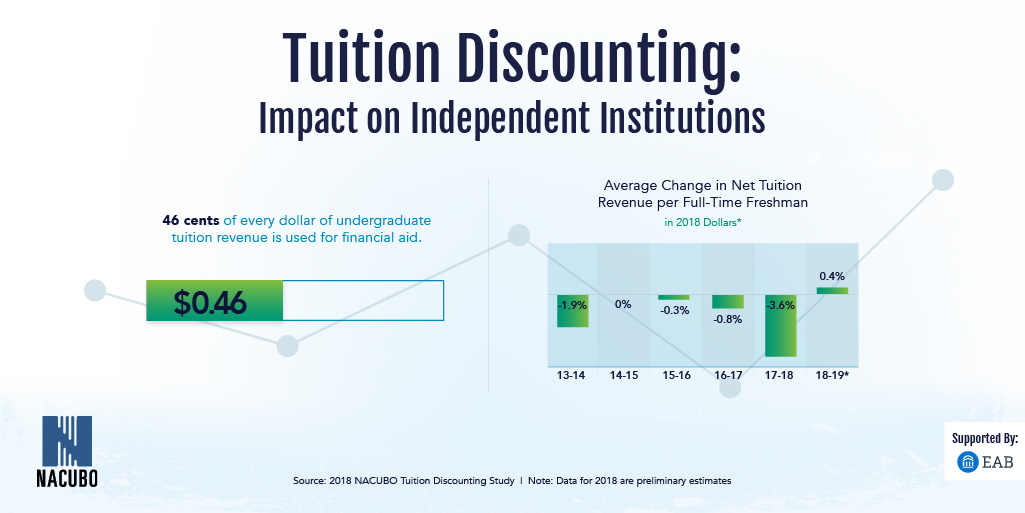 “These numbers indicate that institutions may be finding efficiencies and ways to manage with less tuition revenue,” said Matthew Hamill, senior vice president of advocacy, communications, and research. “At NACUBO, we are committed to helping all colleges and universities evaluate their business models and identify sustainable solutions so that they can continue to serve students and carry out their missions.”

For a copy of the full report or to talk with a NACUBO spokesperson about the findings, please contact Katy McCreary at kmccreary@nacubo.org.