April 30, 2018 (Washington, DC) – Private colleges and universities are on the brink of using half the tuition and fee revenue they collect from first-time freshmen to fund institutional grants, according to a new report from the National Association of College and University Business Officers (NACUBO).

In the 2017 NACUBO Tuition Discounting Study, 404 private, nonprofit institutions reported an estimated 49.9 percent institutional tuition discount rate for first-time, full-time students in 2017-18—the highest in the history of the survey. This means that for every dollar in gross tuition and fee revenue collected from those freshmen, institutions used nearly half for financial aid in the form of grants, scholarships, and fellowships. Among all undergraduates, the estimated institutional tuition discount rate was 44.8 percent, another record high. 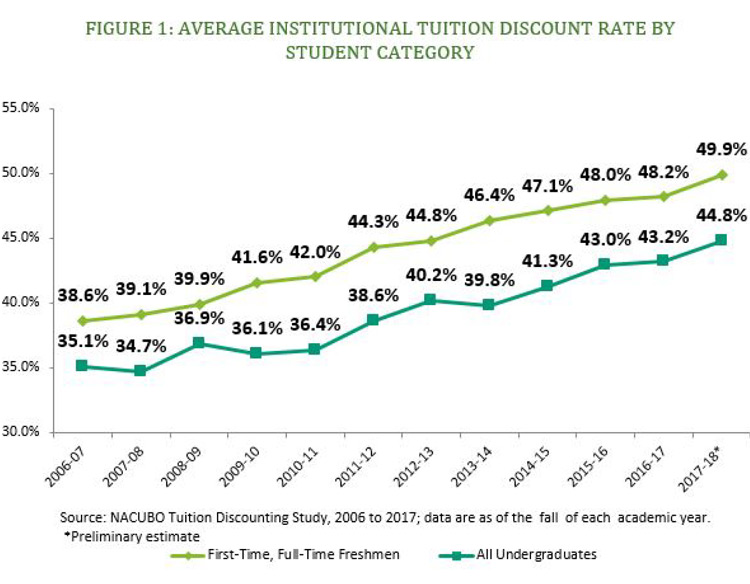 Rising tuition discount rates have softened the impact of private, nonprofit college and university sticker price increases over the past decade. While the average published price for tuition and fees at these institutions has increased 42.1 percent since 2008-09, the average net price for freshmen rose just 18.8 percent–thanks to institutional financial aid that rose much faster. Furthermore, most students benefit: In 2017-18, an estimated 88.7 percent of freshmen and 79.5 percent of all undergraduates received grant aid, covering more than half of tuition and fees, on average, for both cohorts.

“The NACUBO Tuition Discounting Study is an important reminder that the price tag on a college education isn’t what most families ultimately pay,” said Ken Redd, NACUBO senior director of research and policy analysis. “As students and families evaluate the value of higher education and their college-going options, they should keep in mind that the vast majority of undergraduates attending private colleges receive financial aid from their institutions, and that this aid covers well over half the tuition price. While this is good news for students and their families, it also means that tuition revenue at these schools remains very constrained.”

For the colleges and universities studied, tuition discounting led to a slight decline in net revenue per freshman, on average, in 2017-18, capping a five-year period of flat or declining average revenues reported in the NACUBO Tuition Discounting Study series. Many respondents reported implementing retention, recruitment, and financial aid strategies in fiscal year 2017 to increase revenue.

To talk with a NACUBO spokesperson about tuition discounting and the results of this report, please contact Katy McCreary at 202.861.2503 or kmccreary@nacubo.org. The full 2017 NACUBO Tuition Discounting Study is available for purchase on the NACUBO website.