(Washington, D.C.) - The gap between the sticker price on a private college education and the amount most students actually pay continues to widen, according to new data from the National Association of College and University Business Officers (NACUBO).

In the 2015 NACUBO Tuition Discounting Study, 401 private, nonprofit colleges reported another year of record-breaking tuition discount rates for 2015-16, topping last year's previous highs. For academic year 2015-16, the average institutional discount rate—or the percentage of total gross tuition and fee revenue institutions give back to students as grant-based financial aid—was an estimated 48.6 percent for first-time, full-time freshmen and 42.5 percent for all undergraduates. In other words, these private colleges put about 42 cents on every dollar of tuition and fee revenue toward scholarships and grants. 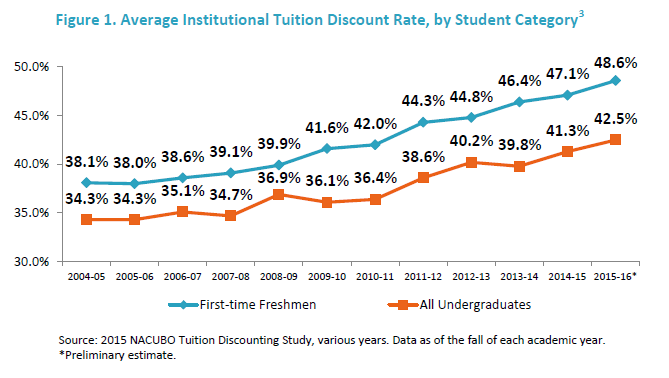 For student recipients, those funds went further than ever before. About 88 percent of first-time, full-time freshmen and 77.6 percent of all undergraduates were awarded aid, which averaged roughly half the cost of tuition and fees for both cohorts.

"Even in a year of lower endowment investment returns, colleges and universities spent substantially more from their endowments. It is not surprising to see higher discount rates as many institutions are directing endowment spending to student financial aid," said NACUBO President and CEO John Walda.

While the discounting lessened students' tuition burdens, many institutions are beginning to acutely feel effects of the strategy. Net revenue growth slowed to just 1.8 percent—below the 2.2 percent rate of growth in 2013-14—and 37.5 percent of institutions reported declining enrollments in both their first-year class and total student body.

"With the help of their endowments, private colleges and universities continue to strive toward increasing affordability for their students," said Ken Redd, NACUBO's director of research and policy analysis. "However, with net revenue growth slowing down and the nation's student population evolving, many schools are testing strategies to ensure they can continue to deliver on their missions and remain financially sustainable in the years ahead."

The strategies CBOs and other higher education leaders employ to tackle these issues will have broad implications for many private institutions in the future, the report notes. To speak to a NACUBO spokesperson about the data and strategies schools are implementing, please contact Katy Hopkins at khopkins@nacubo.org. The full report is available for purchase on the NACUBO website.

About NACUBO
NACUBO, founded in 1962, is a nonprofit professional organization representing chief administrative and financial officers at more than 2,100 colleges and universities across the country. NACUBO's mission is to advance the economic viability, business practices and support for higher education institutions in fulfillment of their missions. For more information, visit www.nacubo.org.

This press release is also available as a PDF.