Final data gathered from 832 U.S. colleges and universities for the 2014 NACUBO-Commonfund Study of Endowments® (NCSE) show that these institutions’ endowments returned an average of 15.5 percent (net of fees) for the 2014 fiscal year (July 1, 2013 – June 30, 2014) compared with 11.7 percent for the 2013 fiscal year. The 832 institutions participating in this year’s Study represented $516.0 billion in endowment assets.

These rising return rates have enabled colleges and universities to increase spending from their endowments to support student financial aid programs, faculty research, and other activities vital to their missions. In fiscal year 2014, 74 percent of all NCSE respondents said they increased spending from their endowments, with a median increase of 9.3 percent. On average, annual endowment funds accounted for 9.2 percent of institutions’ total operating budgets (compared with 8.8 percent in 2013).

Domestic equities generated the highest return in FY2014, at 22.8 percent, followed by international equities, at 19.2 percent. Alternative strategies returned 12.7 percent, fixed income returned 5.1 percent and short-term securities/cash/other returned 1.9 percent. Returns for all five asset classes were higher in FY2014 than they were in the previous fiscal year. (All returns are reported net of fees.) 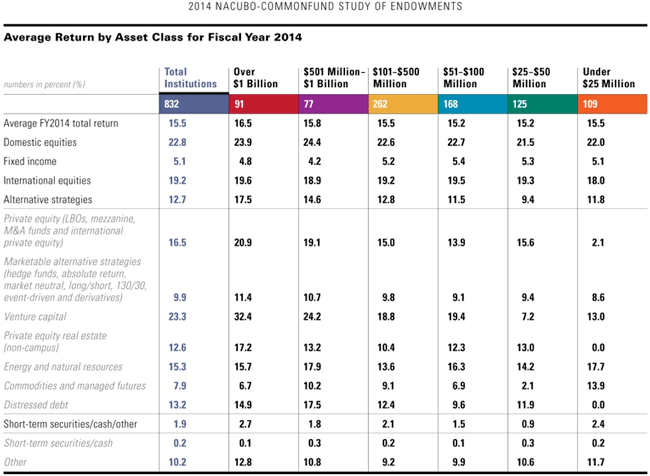 Participating institutions’ three-year net returns (from FY2012 to FY2014) averaged 9.0 percent, led by institutions with assets over $1 billion, at 9.5 percent, and those with assets under $25 million, at 9.4 percent.  Five-year returns averaged 11.7 percent, with the same two size categories reporting the highest returns (and, once again, separated by just 10 basis points). Ten-year returns averaged 7.1 percent, with the largest endowments’ returns ahead of the other five size cohorts by 90 to 170 basis points.

Commenting on the return data, NACUBO President and Chief Executive Officer John D. Walda said, “Perhaps the most significant finding is the rise in longer-term returns, which will be very beneficial to colleges and universities that are seeking to serve a broader variety of students than ever before. A higher level of long-term returns enables them to support their missions while remaining on a sound financial footing.”

Commonfund Institute Executive Director John S. Griswold noted that return data indicate an increasing emphasis on risk management among participating endowments. “We have observed a clear increase in the number of institutions employing risk limits and guidelines and applying stress tests in managing their portfolios,” Griswold said, adding, “Institutions appear to be remaining vigilant with an eye to avoiding a repetition of their experience in the financial crisis of 2007-2009.” (Please refer to the “Risk Management” section later in the release for additional information.)

When viewed across the size cohorts, Study data show significant differences in asset allocation. For example, while institutions with assets over $1 billion allocated 13 percent of their portfolios to domestic equities and 8 percent to fixed income, institutions with assets under $25 million allocated 43 percent and 26 percent to these asset classes, respectively. The largest endowments allocated fully 57 percent of their portfolios to alternative strategies, while at the other end of the size spectrum the smallest endowments allocated only 10 percent. Across the other four size cohorts, a similar pattern was observed: Allocations to traditional asset classes—domestic equities and fixed income—were higher at smaller endowments, while the reverse was true for alternative strategies, where the size of the allocation decreased with the size of the endowment. Only allocations to international equities and short-term securities/cash/other were relatively steady across size cohorts.

Among allocations to alternative investment strategies for the Study population as a whole, the largest allocation, at 18 percent, was to marketable alternatives, followed by private equity at 11 percent. Other allocations were: energy and natural resources and private equity real estate (non-campus), at 6 percent each; venture capital, at 4 percent; distressed debt, at 2 percent; and commodities and managed futures, at 1 percent.

Among Study participants, 629 reported that they carry long-term debt; the average total debt stood at $217.5 million as of June 30, 2014, compared with $204.3 million a year earlier. Median debt declined slightly to $55.2 million from $56.3 million. Thirty-two percent of Study participants reported increasing debt in FY2014, a one percentage point increase over the course of the year. Sixty-two percent reported a decrease, unchanged from the previous Study.

Staffing, Outsourcing and Consultant Use

Endowments reported an average of 1.6 full-time equivalent (FTE) employees devoted to the investment management function in FY2014, unchanged year over year. Endowments with assets over $1 billion had the largest average staff size at 9.3 FTEs; endowments with assets between $501 million and $1 billion reported an average of 2.4 FTEs. All other size cohorts reported less than one full-time equivalent devoted to investment management. Forty-three percent of Study respondents said they have substantially outsourced the investment management function, up from 40 percent the prior year and 38 percent the year before that, continuing a trend toward outsourcing that has been on the rise for several years. Eighty-two percent of the Study population reported using a consultant for various services related to investment management, a moderate decrease compared with last year’s 85 percent.

The Study found that 57 percent of participating institutions employ risk limits (strategies for measuring risk in specific forms of investments) in their portfolios, a marked increase from last year’s 50 percent. Seventy-six percent of this group use volatility calculations, such as standard deviation, up from 72 percent a year ago, while 61 percent use measures such as alpha and beta, up from 55 percent in FY2013. Forty-six percent of respondents reported using stress testing or scenario analysis for their portfolios compared with 41 percent a year ago.

Additional materials in support of the NCSE are available on the NACUBO website, including tables that demonstrate the endowment market values of participating institutions in FY2014 and percentage changes in market values from FY2013 to FY2014.

NACUBO is a membership organization serving more than 2,500 colleges, universities and higher education service providers across the country and around the world. NACUBO specifically represents chief business and financial officers through advocacy efforts, community service and professional development activities. The association’s mission is to advance the economic viability, business practices and support for higher education institutions in fulfillment of their missions.