The 2019 NACUBO Student Financial Services Benchmarking Report has been released, with findings based on survey responses from 406 U.S. colleges and universities. This year's report provides information on student financial services (SFS) operations during FY18 (July 1, 2017, to June 30, 2018, for most schools).

The data show that student payments and institutions’ credit balance refunds continue to move away from manual processing toward electronic options. In FY18, institutions received 51.7 percent of student payments via the internet and 31.2 percent manually, which includes students mailing paper checks to the SFS office, coming in to the office to make a credit card payment, or making any other payment that might require significant manual processing. When considering student payment methods, student use of paper checks has declined by 5.8 percentage points, from 31.3 percent in FY14 to 25.5 percent in FY18. At the same time, student use of web checks or e-checks has increased from 31.7 percent in FY14 to 40.5 percent in FY18. 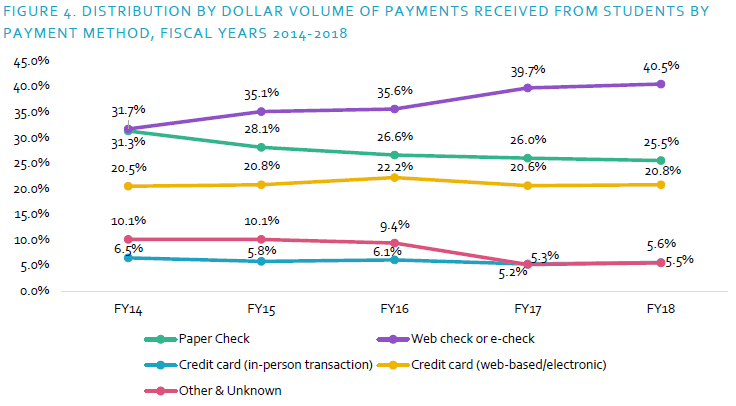 The 2019 NACUBO Student Financial Services Benchmarking Report is available for purchase on the NACUBO website. Staff at participating institutions can access a complimentary copy of the report through NACUBO’s Online Research portal. Infographics are also available.

As the result of advocacy efforts by NACUBO and several other higher education associations, the Department of Veterans Affairs recently announced an extension for institutions to report their enrollment headcounts. The agency also updated the process for institutions to submit the information, eliminating manual data entry.

Schools with Perkins Loans that have been in default for over two years will now have until June 30, 2023, to either assign the loans to the Department of Education or purchase the loans.