The Department of Education recently released the FY12-13 financial responsibility scores for nonprofit and proprietary institutions participating in the Title IV financial aid programs. The number of nonprofit institutions scoring lower than the 1.5 cut-off point needed to be considered financially responsible under ED rules dropped slightly to 131 from the previous year 's 149. Many of the failing schools are quite small, including a number of hospital nursing programs, vocational schools, and religious institutions. 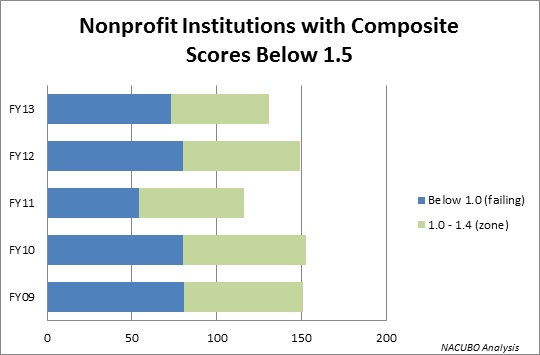 Interestingly, Sweet Briar College, which recently announced it would close due to financial and enrollment pressures, is not among the failing colleges. Sweet Briar had a composite score of 3 for FY13, the highest possible under the ED methodology, and did not score lower than a 2.2 in the last five years. This fact may fuel questions about the efficacy of ED's standards.

ED's financial responsibility standards (34 CFR 668.171), promulgated in 1997, rely on three ratios to measure an institution's financial health. These ratios—primary reserve, equity, and net income—are weighted and combined into a single composite score ranging from -1 to 3. An institution with a composite score of 1.5 or above is considered fully financially responsible, while a score between 1.0 and 1.4 places the institution in the "zone alternative" and subjects it to heightened scrutiny. A score below 1.0 means a school has failed the test and must either provide a letter of credit equal to half of the institution's previous year's Title IV expenditures, or provide a letter of credit for 10 percent of its previous year's funds and accept provisional certification.

NACUBO and other higher education associations have expressed concerns about the scores' accuracy and ED's inability to stay up-to-date with changes to accounting standards.

A task force formed by the National Association of Independent Colleges and Universities, with representation from NACUBO, issued a blistering 2012 report on the department's practices and recommended a number of reforms. The issue is also highlighted in Recalibrating Regulations of Colleges and Universities, the report recently issued by a task force commissioned by a bipartisan group of senators.

Recent GASB exposure drafts address disclosure concepts and clarify guidance in areas such as leases and public-private and public-public partnerships.